Sicily is so rich in terroirs and terrains that one may say it should be considered as a whole continent of winemaking, rather than an island. In fact, Sicily has more vines than South Africa, which is by the way, world’s 7th largest wine producer.

Of course, I couldn’t cover it all. Eloro and its’ Nero d’Avola was tempting, vineyards of Val di Notto are a must at least for the picturesque sites. Vittoria is Sicily’s only DOCG and I was curious what’s so different in there. And then, of course, I’d love to visit the famous Marsala region. But I’ve chosen something completely different – Europe’s most furious active volcano, which hosts terraced vineyards on its’ slopes, squeezed in between the stoned lava flows. How about a DOC on a 1000 meter elevation?

When talking about the history of this volcanic viticulture, we actually mean whole Italy’s winemaking past. The Greeks first colonized Sicily and Calabria, and this is where they planted the first vineyards and brought a professional attitude to local winemaking.

Therefore, Sicilian viticulture dates back to 800 BC.

However, modern times of this wine region weren’t always full of glory. More or less until the end of XX century local grapes were sent to mainland Italy or even France to be added to their blends (as Europe was suffering of phylloxera plague but wasn’t ready to interrupt production of its’ wines). But finally in the 90’s it has changed. Giuseppe Benanti whose family was growing vines mainly for private consumption from generation to generation, decided to turn it to a professional and challenging venture. His wines received surprisingly (for those times) good feedback from connoisseurs and international interest arose in the area. Before you could buy land at the Etna slopes for a few thousand euros.
Today it may cost you a few millions.

Therefore, the actual age of modern winemaking is around 20 years here. Before all this was land of farmers. This area doesn’t have yet a fame among consumers worldwide like Barolo or Burgundy do. The wineries were established quite recently and it’s pretty hard to find wines which are already aged. For example I couldn’t find a wine from 2009 (and I looked hard as I needed it so badly). The production volume, if we are talking about premium Etna wines is also small – from 50 000 to 500 000 bottles a year. And these wines are so special that the wineries are challenged to leave anything for themselves. They don’t really suffer of lack of demand.

There is nothing more significant in this region’s geography than the Etna volcano itself. But let’s take a closer look at its’ position on Sicily and the shape it forms around Etna:

The highest of Etna vineyards rank among the highest in Italy and overall in the world. The limit of Etna DOC zone is 1100 meters and the best vineyards are located at around 800 m elevation. This altitude ensures a long ripening period, which develops a lot of complexity in the berries, and, most importantly, pleasant acidity. It’s very unusual to taste wine from Sicily and encounter this high acidity. Harvest here is end of October, one of the latest harvests in Europe.

Thanks to the half-moon (or belt) shape of the region, saying that the wine is an Etna DOC is a way too generic term. This shape causes a creation of thousands of mesoclimates, each of them with a different sun exposure, elevation, soil and level of Mediterranean influence.

The Mediterranean and high elevation of vineyards ensures perfect reflection of sun from the water. It helps to ripen the grapes at such a high elevation. Similar effect can be observed at Lake Geneva or along the Mosel.

It’s hard to describe how it looks in reality, unless you saw the high slopes of Etna. When we were driving towards the vineyards, we saw huge parcels covered with black stones (I was first thinking it must be brought here for construction). Then we found out that lava flows here are much frequent than people outside of Sicily imagine. It happens every few years that Etna erupts and channels are built for controlled lava flow. Obviously, whatever gets covered with lava doesn’t survive and gets stoned.

I’ve seen vineyards and then right next to them huge pieces of land covered with black lava. Of course, it’s more and more common at higher points than 1000 m, but I’ve seen it at 800 m located vineyards as well.

What’s even more impressive is that wineries in order to acquire more territory are cleaning up the parcels covered with lava stones. And it’s a very difficult job!

But why do they sacrifice their time and workforce for this lava soil? When Etna erupts it brings down different layers of soil, it burns whatever it find on its’ way and then settles that down on top of the land. Thousands of years may pass until that soil becomes available for agriculture naturally. There are a few rare parcels on Northern Etna which have around 50 000 year old soils. Doesn’t sound impressive? Well, this is the oldest type of soil out of the layers that can be used for planting.

Lava stones enrich the soil with very important nutrients for viticulture – iron, copper, phosphorus, magnesium and others. It’s formed by several types of lava of different age and different eruptive centers, with an addition of sand and ash.

At the same time, the complexity of soil forces winemakers to do all the works on vineyards manually, train vines in space-reducing ‘alberello’ style and form terraced vineyards.

What brought me to the wineries I’ve visited is that they had parcels with vines over 130 years old, which overcame the disastrous Phylloxera plague. Overcame without being grafted, I mean.

Obviously, I was curious to find out more about it, as before wherever I travelled to in Europe, I’ve seen only grafted vines.

The soil on the parcel with these Pre-Phylloxera vines consists mainly of ash and volcanic pumice. There is a high concentration of silica sand and low concentration of clay in these volcanic soils. Additionally, the surface waters from typical on Etna heavy rains pass through the sand surface very fast, sealing the soil and imprisoning the phylloxera louse, immediately drowning them.

Besides that, the environment of viticulture on Etna wasn’t really phylloxera friendly. Imagine, while in France the country was fully covered with commercial vineyards, producing and selling their wine overseas, having a need for higher yields, regularly replanting their vines, here it was just the opposite. No commercial winemaking, only farmers who didn’t need to produce much wine to cover their own household needs. Thus, vines weren’t often replanted and there was little chance to bring in the plague to their vineyards with new plants.

As for the visitors from overseas, there weren’t much of them here either. Remember, we are talking about 1000 m elevation, roads were extremely bad, Etna eruptions weren’t as controlled as today. Who would ever come here 🙂

This is how Etna vines survived the Vitis vinifera plague of Phylloxera. Now let’s talk about the taste of these resistant (or just lucky?) vines. 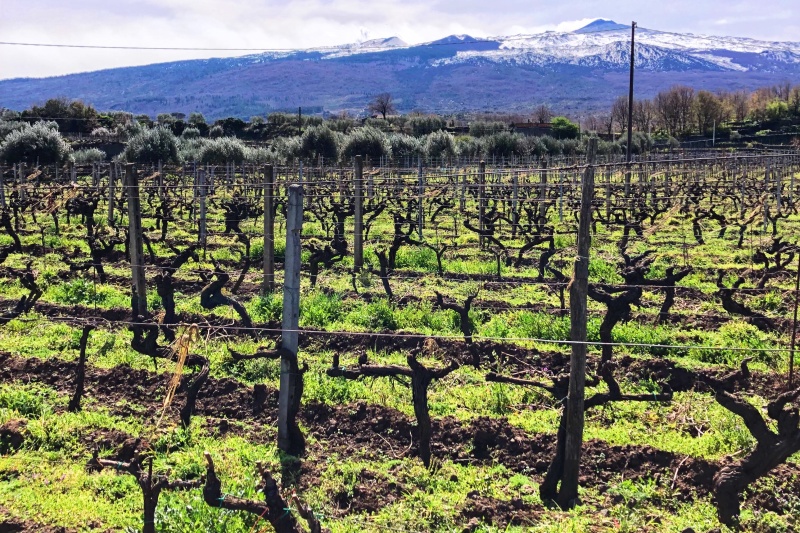